Home » Blog » Fishing » The Night of the Big Wind 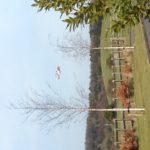 The Big Wind stuck Ireland on the night of January 6 to 7, 1839, it was the worst storm to have swept the country for 300 years, up to 300 people died and the modern equivalent of £250 million of damage was sustained across the country.

In the days before the  storm, the weather was very odd. The country had been covered in a blanket of snow, then on Sunday January 6 the weather suddenly became very warm, some said temperatures soared to around 25c, melting all the snow.

That day, a deep Atlantic low pressure system began moving towards Ireland, where it met a warm weather front creating hurricane conditions. Winds with speeds of almost 200 kmh hit the west coast. By about 10 pm the entire country was engulfed.

In many rural areas the winds blew the thatched roofs off countless homes and in many cases the embers from the turf fires in their hearths set the thatch on fire. The damage to property was worst in Connacht, north Leinster and parts of Ulster. In Limerick masons and slaters were earning 7s 6d a day, a small fortune. (In 1845 the famine relief fund rate was one shilling a day. JR.)

More than 40 ships around the coast were wrecked. In Roundstone, 12 men from the Coast Guard lost their lives. At the time many thought it was the end of the world.

Hurricane Debbie in 1961 and Hurricane Charley in 1986 were equally destructive but none has lodged in folk memory like The Night of the Big Wind in 1839.